2013, so long since last post, where has the time gone


It's September, working on some new ideas, which started out as a celebration of one of Accrington's most famous products, the Accrington Nori brick, the best in the orld, and used in foundations of the Empire State building

All ideas evolve and having made a mould to create a paper Nori brick, initially using mashed up news paper, I wondered if I could create one using toilet roll paper


Introducing the ‘SCHIT-A-BRIQUE’ , the Brick with Attitude

After making bricks based on the classic Accrington Nori brick, using mashed up newspaper, I successfully used soaked cheap toilet roll paper, and the Schit-a-brique  was born.
The original idea was to celebrate the Nori brick , so a new mould was made allowing names to be imprinted on the brick, so now the Schit-a-brique came of age.

Space allowed  1 or 2 lines to be created, each with a maximum of 8 letters, which could be extended to 10.
This meant that ‘ACCRINGTON’ would fit but  ‘OSWALTWISTLE’ would not unless I split it over 2 lines.

The mould for the brick has been designed so that either a full sized brick or a brick shaped tile can be produced . I have produced both bricks and tiles using either newspaper or toilet paper, each having their own special characteristics. The tiles are light enough to be used in my 3D artwork, and mounted on canvass. 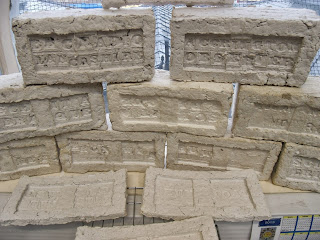 I am trying out a few ideas, including people’s names, local town names, newspapers and radio stations In fact any wording that can be fitted in the space, assuming I have enough of each letter

Full sized bricks can be used for building things, as long as they don't get wet, but the brick tiles can be fixed to picture canvass, and produce something thoughtful, possibly controversial 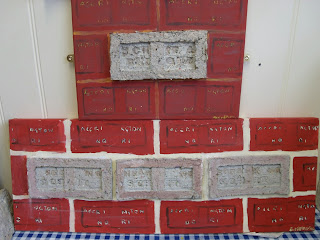 Posted by Simon Dawson at 14:09 No comments: